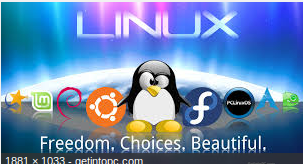 These days it also has a great graphical interface to help users get around if they are used to Windows or Mac.

I set my laptop to dual-boot between Windows 10 and Linux, and found that I almost never go in to Windows any more. I just can't take how much slower it is by comparison.

Beyond better security and stability, Linux also boasts an absolutely huge free software library, letting you do almost everything you'd normally pay to do in Windows without reaching for your wallet.

One of the handy things Linux can do for you is generate really strong passwords for you to use with different websites.

Using a unique password for each website is a must these days. We've seen breaches of big companies like Yahoo, LinkedIn, DropBox and others where passwords were stolen and no one realized it until years later.

So how can Linux create secure passwords for you? There are a many ways, I'll focus on the easiest two. Both require you using the terminal, a command-line interface that scares some people but shouldn't, it's just a fast place to get things done.

First let's try Pwgen. As the name suggests it's an app for generating passwords. Open a terminal window by either pressing [CTRL]+[ALT]+ T or by browsing to the terminal app with your mouse.

If you are using Ubuntu Linux type this command: sudo apt -get install pwgen

Once you enter your admin password the app will install. Now we are ready to make passwords.

From the command line type: pwgen 12 1

This will create a single 12 character password. To make it even stronger let's add instructions to include uppercase, numbers, and special characters.

There is another option for creating strong passwords, use GPG. GPG is included in your Linux distribution by default, and is really powerful.

Not too likely anyone will hack that.

Of course with all these passwords being so complex you'll need to use a good password manager. Lastpass gets great reviews if you don't mind paying for an annual subscription.

If free is more your speed I suggest using Encryptr. It syncs the passwords across all your devices (encrypted of course) and can run on Linux, Mac, Windows, and Android.

Passwords are your first line of defense, and many people get hacked because they can't be bothered to use strong ones. While it can result in some interesting celebrity photos being posted online it's entirely avoidable.