Another WiFi Mesh Player - It's Google

When setting up WiFi in their home many people buy a router, and then try to deal with poor signal and dead zones in their house.

Often people will try WiFi extenders or powerline adapters to deal with WiFi dead zones, but these solutions have their own problems.

WiFi extenders will increase the range of your WiFi signal, but reduce your speed by around 50% with each extender relaying the signal.

Powerline adapters, which use the power wiring in your home to provide connectivity back to your router, often encounter interference and share the bandwidth across all connected devices.

Mesh networking is different, it provides the signal range extension without compromising the speed that happens using WiFi extenders, and avoids the interference and other challenges of powerline adapters. This is how many businesses provide WiFi to their employees & guests.

The two leaders in the space are Luma and Eero. Both provide easy to set up and use mesh WiFi for your home, similar to what you will find in many offices in terms of coverage and reliability, but without the need for an IT department to maintain it. 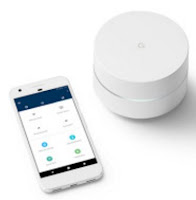 Google announced they are getting in to the mesh WiFi space for consumers now with their "Google Wifi" product.

Google Wifi is similar to Luma and Eero in that you can order a single device or a 3-pack. Their pricing model is the most aggressive of the three vendors at $129USD for a single unit or $299USD for a 3 pack.

If the Google holds to these numbers they will be $100 less than Luma and $200 less than Eero for a 3-pack, a move no doubt positioned to help them break in to the home mesh space.

The company says Google Wifi will be available for pre-order some time in November 2016.

Right now some of the technical details aren't clear, and I would need answers before I could suggest this as an option for home users.

My biggest concern surrounds the DNS settings in the Google Wifi solution, and this stems from what Google did with their Chomecast dongle. The chromecast is a great cheap streaming device, but it is hard-coded to use Google's own DNS servers. This presents two problems:

1) Google sees all the streaming requests made using a Chromecast. This may or may not bother you, but as I've written lately Google already has a lot of insight in to your online habits.

2) You can't use a smart DNS service to get around geo-restrictions for content. Your ability to take advantage of products like Getflix are impacted using a Chromecast.

The only way to defeat this hard-coding is to put rules on your router specifically denying access to Google's DNS servers. (8.8.8.8 and 8.8.4.4 if you want to try.) Once you do this the Chromecast will fail back to whatever DNS provider your router says to use.

So if Google is now providing the router will I have that ability? Will I start to see an increase in targeted advertising once Google knows what kind of content I access on all my devices? Right now I can't say, which makes me uncomfortable.

It's great to see mesh WiFi becoming so easily set up in the home, but as with everything from Google, how much personal information you surrender to subsidize the cost of the product is a point worth considering.

Personally I'll be sticking with my Luma devices. The product keeps evolving and improving, and my WiFi speeds remain great throughout everywhere in the house.

If you're frustrated with your current WiFi I encourage you to look at a mesh solution. Just maybe not Google's hardware until we know more.