Use Oversight To Protect Your Mac Camera & Microphone

Remember years ago when Mac users used to proudly say "Mac's don't get viruses!"?  Perhaps you know a few Mac owners who still tout this line.

It wasn't true then, and it isn't true now.

Mac's can get viruses. All computers can get a virus. The number of viruses for a specific platform usually has a correlation to that operating system's market share. Windows owns the majority of desktops, so more Windows viruses are out there than others, but it doesn't eliminate all others.

Malware these days is usually created by criminal enterprises, not a disgruntled teenager wearing a hoodie despite what the media might portray. The crooks go after targets that have a good chance of a payoff. The increase in Mac sales resulted in an increase in Mac malware.

An exploit going around these days will attempt to access your computer's webcam and microphone without your knowledge. It's done to transmit all the audio and video back to systems elsewhere which can then be reviewed for confidential information or compromising audio/video blackmail. This has become so common many stores now sell covers you can slip over your webcam when it's not in use. (nb: a piece of masking tape or post-it note are just as effective and a lot cheaper)

But what else can you do? 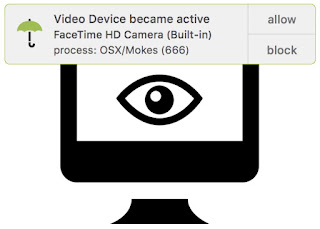 Well, if you use a Mac you can install OverSight. This free app will tell you when something attempts to access your Mac webcam or microphone, and gives you the option of allowing or blocking the access.

Oversight was specially developed to help protect Mac users from unauthorized access to their cameras & microphones, a growing threat given many Mac users believe they are not subject the same security concerns as Windows users.

Installing OverSight is simple, download the zip archive containing the application. Manually unzip it if necessary. Double-click on 'OverSight_Installer.app' and choose 'Install'

Once installed you're done. The app will automatically run every time you log in. There are full step-by-step directions with screenshots available on the OverSight web page.

Unfortunately there isn't a Windows version of OverSight. For Windows users I suggest using a current anti-malware product like Sophos as it's free and effective.

If you happen to be using a Lenovo laptop I have it from an insider at the company their webcams are hard-wired to always turn on the indicator LED when the camera is enabled, so you have some extra reassurance there.

The bad guys are always trying to figure out how to compromise systems in ways that will make them money. Taking basic precautions these days is simply a must. Tools like OverSight can help.