I've written about some new players in the home WiFi space recently. Eero, Luma, and Plume all offer high-speed WiFi throughout your home using multiple units to deliver better performance. The difference is incredible.

A new player is stepping on to the stage with a new take on this technology. Securifi is combining the ability to cover your home with fast, reliable WiFi and a home automation hub all in one appliance. 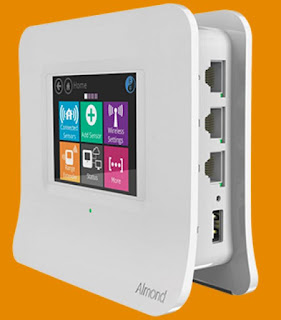 On the surface the Almond 3 sounds like a pretty incredible offering. It promises great WiFi throughout your home, will let you dive in to home automation without needing to buy a hub, and also promises easily managed enhanced security.

It's another in the line of self-updating appliances, so you never have to remember to check for new firmware and update it.

The Almond 3 is unique in the space (so far) for another reason, it includes a touchscreen on the units. You don't need to set it up using a computer, tablet, or smartphone. The configuration is done on the unit itself using the touchscreen, and they claim the process only takes 3 minutes.

Securifi says the Almond 3 will support up to gigabit internet connections and offers AC wireless, so you're probably good on it's speed for quite a while.

One thing I did notice on the documentation: The Almond 3 works out of the box with zigbee devices for home automation, but if you want to also control z-wave devices you will need to purchase a separate USB dongle for that.

Overall the Almond 3 looks interesting, and I'd consider purchasing the 3-pack if I wasn't already waiting for my Luma order to arrive. I'd like to know the price of the approved z-wave USB dongle so I could compare it against the cost of a Wink home automation hub which supports both protocols.

The Almond 3 is in pre-order right now, so you can get a 3-pack for $299 USD once they ship. When the device goes to full release the price will increase to $399 USD. Unlike the Eero, Luma, and Plume Amazon.com will ship the Almond 3 to Canada for an additional $43.91 USD.

It makes sense for home automation and enhanced WiFi to start converging, and I expect to see similar offerings from other manufacturers in the near future.

If you're fed up with spotty WiFi speed and coverage in your home this looks like a good contender.